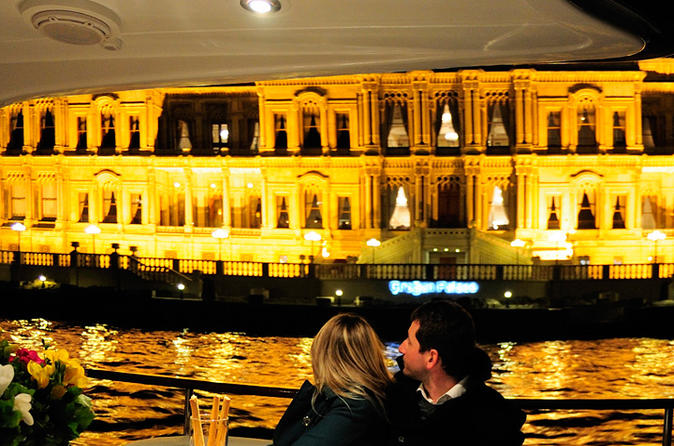 Along with the history, Dolmabahce was developed by villas and pavilions constructed by different Sultans, and in the course of time, took the appearance of a palace called “Besiktas Waterside Palace”. During the rule of Sultan Abdülmedjid, on the grounds of being timber and useless, destroying of Besiktas Waterside Palace began in 1843 and the foundation of today’s Dolmabahce Palace laid down in its place.

Until seventeenth Century this place was one of the coves in Bosphorus. In mythology, it is the site where Argonauts’ legendary ship “Argo” had anchored to discover the Golden Pelt, and in history  Sultan Mehmet the Conqueror had beached his vessels again in that cove to cross over to Golden Horn while the conquest of Istanbul. 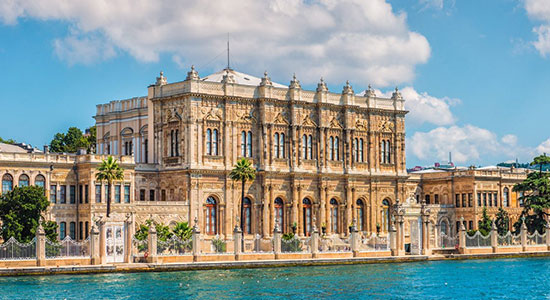 That cove, which was a natural harbour where the Ottoman Admirals anchored the maritime fleet and the traditional naval ceremonies, had taken place, beginning from the 17. Century onwards had been begun to be filled up time to time and became one of the unique gardens of Bosphorus called Dolmabahce ( Mean -Filled up Garden- in English). Along with the history, Dolmabahce was developed by villas and pavilions constructed by different Sultans, and in the course of time, took the appearance of a palace called “Besiktas Waterside Palace”. During the rule of Sultan Abdülmedjid, on the grounds of being timber and useless, destroying of Besiktas Waterside Palace began in 1843 and the foundation of today’s Dolmabahce Palace laid down in its place. Together with the perimeter walls, the building was finished in 1856. Dolmabahce Palace, constructed on a site of over 110.000 m2, is consisted of 16 discrete sections besides the main structure. These sections are the buildings with several functions, like palace stables,  pharmacies, mills, kitchens, glass shop, aviaries, foundry, patisserie shop. During the domination of Sultan Abdülhamid II. (1876 – 1909), the clock tower and the lodges in the rear garden of the Heir Apparent’s apartment were attached. The palace was built by the prominent Ottoman architects of the period Karabet and Nikogos Balyan. The main block of the palace is composed of 3 sections, namely; Muayede (Ceremonial Hall), Mabeyn-i Hümayun (Selamlik) and the Harem-i Hümayun (Harem). Muayede is the hall where Sultan received guest of honours and official ceremonies took place, Mabeyn-i Hümayun is where state affairs take place, Harem-i Hümayun is the private section of Sultan and his family, and in the center.

Today whole sections and units of Dolmabahce Palace are renovated and opened to visitors. Main exhibition units of Dolmabahce Palace are: two “Precious Items Exhibition Halls” where the valuable items of the palace are demonstrated; “Internal Treasury Exhibition Building” where examples from the National Palaces Yildiz (mean Star in English) Porcelain collection are displayed in that section; “Art Gallery” where generally National Palaces Painting collection in parts are, in long periods, demonstrated in this gallery; “Abdülmedjid Efendi Library” in Mabeyn section of the Palace; “Historical Corridor” under the “Art Gallery” a constant exhibition of a collection of bird motifs from architectural ornamentations and diverse palace items and objects. The old “Furnishing Department” at the entrance to the Dolmabahçe Palace is now the “Cultural Information Centre”. Presentation activities and scientific studies taking place in different National Palaces are directed from that center. Also, there is a reference library in the service of scholars consists of mostly the Nineteenth Century publishing. In the gardens of Clock Tower, Aviary, Furnishing Department, Harem and Heir Aperient’s apartment sections, gift shops and cafeterias are formed to service the visitors. Introductory books about Turkish National Palaces prepared by the Cultural Information Centre, several postcards, and replicas of the paintings from the National Palaces Art collection are on sale in those shops. At the same time, Muayede Hall and the gardens are assigned to international and national receptions. Today has been acquired of the museum sections and, of artistic and cultural activities with those new arrangements the Palace. You can see and visit this famous historical Palace one of our tours. Please click the links for more information about our tours. DAILY BOSPHORUS CRUISES ISTANBUL DINING CRUISES ISTANBUL PRIVATE YACHT TOURS ISTANBUL CITY TOURS
Category: informationBy aytacyldJune 24, 2020Leave a comment
Tags: bosphorus tour istanbulbosphorus tours istanbuldolmabahçe palace istanbuldolmabahçe palace tour price