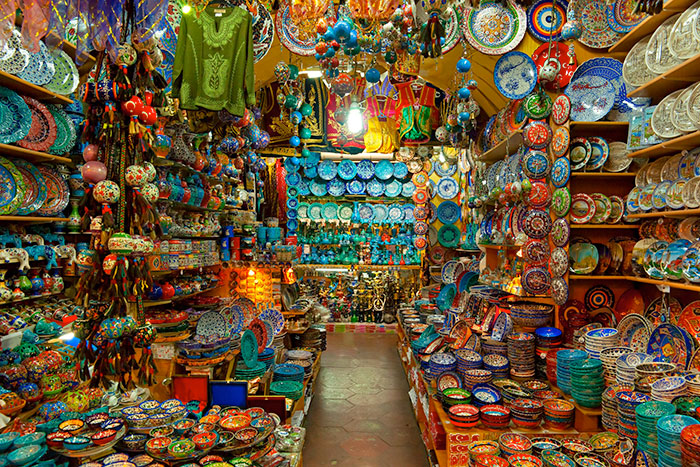 Historic Spice Bazaar was built in the 1660s as part of the Yeni Cami (New Mosque), with rent from the shops supporting the upkeep of the mosque as well as its benevolent activities, which included a school, hospital, and hamam. The Mısır Çarşısı (The market’s Turkish name-Egyptian Market), references the fact that the structure was initially endowed with taxes levied on goods imported from Egypt. In its golden age, the Egyptian Market was the final stop for the camel caravans that traveled the Silk Road from India, China, and Persia. Lively colored spices are exhibited alongside jewel-like lokum (means in English is Turkish delight) at this Ottoman-era marketplace, providing eye candy for the thousands of visitors and locals who make their way here every day. 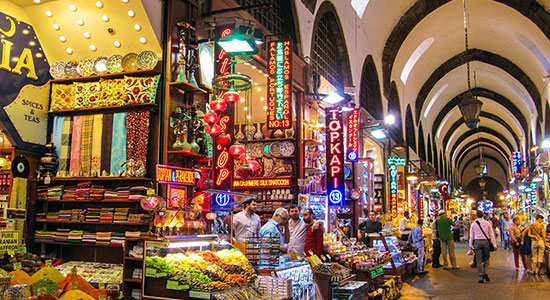 Lively colored spices are exhibited alongside jewel-like lokum (means in English is Turkish delight) at this Ottoman-era marketplace, providing eye candy for the thousands of visitors and locals who make their way here every day. Stalls also sell dried herbs, caviar, honey, dried fruits, and nuts. The number of stands selling tourist trinkets rises annually, yet this remains a big place to stock up on edible remembrances, share a few jokes with vendors and marvel at the well-preserved building.

On the west side of the Spice Bazaar, there are outdoor produce stalls selling fresh foodstuff from all over Turkey, including a wonderful selection of cheeses.  Also, Kurukahveci Mehmet Efendi is here. It is the most famous coffee supplier in İstanbul, established over 100 years ago. It is located on the corner of Hasırcılar Caddesi, which is full of shops selling food, kitchenware, and other goods.

With its characteristic as a “Double Bazaar”, the Mısır Çarşısı (Egyptian Bazaar) is a structure constructed in traditional Ottoman pattern as a combination of 2 separate bazaars. With Egyptian Markets successive rows of stone and brick in the conventional Ottoman pattern, the Egyptian Bazaar was built as “L” shaped.  In the intersection point where short and long branches come together, there is a praying square coverted with a cross vault.

As Bosphorus Tours İstanbul,  we are ready to realize your dreams.

You can visit The Spice Bazaar with one of our city tours.